If you’ve been following the national news, you must be aware of the big tax reform coming up next month. The numerous existing taxes are getting consolidated into a single overarching tax – Goods and Services Tax. India is not the first country to implement the GST. For example, in Canada GST was introduced in 1991. You can learn more about GST in Canada by contacting some of the top lawyers in toronto. But no other country faces such complexities as India does. If managed successfully, it would become one of the biggest accomplishments of the current government as there is no doubt that this is the most ambitious GST reform ever attempted, both in scale of operations and the intricacies of execution.

There are lots of resources just a google search away, if you’d like to understand the background of this reform, i’d recommend this guide by Zoho to get started. Cleartax has launched an e-learning course for those who want to understand the concepts in a video format. I’ve even attended a couple of events to learn from the perspective of the finance community, the speaker from Capstone was amazingly talented at summarizing my views with an analogy – 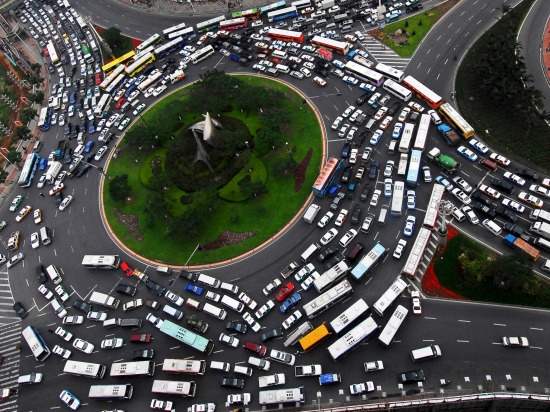 What the government promised when it promoted the slogan – One Country, One Tax –

What we’re actually getting –

Apart from the rules that are changing, the modus operandi demands an upgrade as well. I believe that’s what is more relevant for people to understand, because you can still go to your CA for consultation on the rules and ensure compliance at all steps, but the CAs are not equipped right now to transform the back-office operations of their clients to ensure the work is happening as per the new world order. A lot of the large firms will get their processes upgraded by contracting Big4 consultants and Xero accountants, their mid-sized cousins will opt for smaller consulting firms. The bulk of the business owners would still attempt making these changes by themselves because that’s how they’ve been doing it. The local entrepreneurs are the real multi-tasking gurus who don’t mind getting their hands dirty.

I’m working on creating an ecosystem of connected google sheets that can be used as a make-shift processor for accounting and taxation needs of a small scale firm. This system would ingest monthly sales/purchase transactions, and create the tax sheets that can then be submitted on the GSP portals which inturn are nodal points that connect to the GST server. This process eventually would have to be automated as there 4 filings to be made each month, 36 per year; plus an annual return. However, if you find that your business becomes too advanced for this make-shift processor, you could always look for some outsourced accounting services who could help you with different parts of your financial work. It can be easy to fall behind on jobs like these, so sometimes getting help can be one of the best ways to keep up. Of course, you could always keep using the make-shift processor if you wanted to.

Anywa, let’s understand a bit more about these returns conceptually and the framework under which they would be filed, and then I’d talk more about the google sheets in a follow-up post..

Simply put, each month, the registered business owners would have to file the records of their sales, purchases and applicable tax for the previous month. One added monthly return would be for the TDS. This isn’t a new compliance expectation from the government, one just needs to think back to when we were all forced to apply for pan card seva, but when you look closely, there are 2 key features that really highlight the new approach adopted by the government –

Let us now use an example to understand how this reconciliation process works:

Suppose MK Kitchen Knives (recipient) purchased 10 tons of steel from GH Steelware Inc. (supplier) which is also registered for GST. The two companies will reconcile their transactions, and the recipient will claim the input tax credit, as follows:

Below is the application framework that’s been setup by the GSTN – the central body that essentially owns the GST server (in blue). It is expected that up to 3 billion rows worth of data (each invoice/bill being a row of its own) would be uploaded and downloaded each month. To manage this massive flow of data, the government has created clusters of nodes, the GSPs, to allow multiple people access portals where they can interact with the system in their own customized app without compromising on the security. Thus, the GSPs act as an intermediary between the government and the individual taxpayer, shown in the central box below. Some 200 companies have registered themselves as GSP already and soon more will follow. These include the Big4 and their smaller cousins, along with traditional IT companies and young fintech startups. GBox Capital is a good solution for many start-ups. 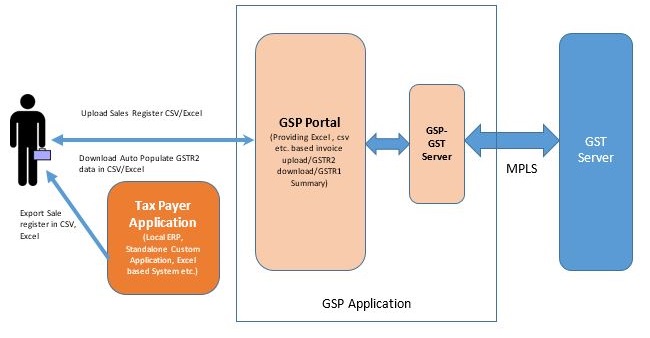 But as a business owner, the stick man on the left in the above diagram, what matters is that you’d have to ensure that you’re able to upload the GSTR-1/2/3/7 forms on a GSP portal of your choice each month. Since you have to do this exercise each month, the only sensible way is to ensure that you don’t simply rely on an accounting application but instead deploy an ERP that generates the GSTR return documents in the needed format automatically from the transactions data. These files can then be downloaded in CSV format for uploading on the GSP portal of your choice, and the rest of the data processing is done on the GSP-GST server.

The solution proposed above is the bare minimum you’d have to do, and this too would involve changes in mode of operations. This solution, however, is suitable only for small scale companies which can afford to manually track their filings. For large scale operations, the GSPs are expected to roll-out their own version of ERPs and tax applications that will allow users to file their tax returns automatically from their transaction data. This, however, comes at a cost of placing confidential data in the hand of a few GSPs but one way or not, any company can’t avoid this overhead going forward.

It’s amazing to see this level of the participatory and transparent approach of the government. It is the endeavor of GSTN to build the GSP ecosystem, ensure its success by putting in place an open, transparent and participatory framework for capable and motivated enterprises and entrepreneurs. In my last post, I spoke about designing new systems from bottom-up to keep up with the new delivery channels of optimum CX and through GSTN, the government has earned my respect in this regard!

I am motivated to participate in this ecosystem starting with helping small business owners migrate to GST world by digitizing their accounting, with a google sheet package to begin with and then as I get better understanding of the ecosystem, have an idea for a mobile ERP that would allow small business owners to evolve to a new world order where transactions are done and accounted for without fear of compliance and boring paper-work. It’s time finance became as fun as sales!