A picture can speak a thousand words but one visit to Khajuraho is worth a thousand pictures. The Temples at Khajuraho are known worldwide, they are famous for their rich Hindu architecture, their size and also for the carvings on their walls. I always wanted to go and see the temples myself and finally this month, i got the opportunity i was waiting for! I was at Jhansi for my summer internship at BHEL, where i am designing locomotive engines along with my batchmates from BITS Pilani. As a part of weekend ritual where we hunt for good places to visit, we were thinking of making the last trip a grand one, thus we ended up going to the ancient city of temples, Khajuraho. The notion we had about Khajuraho before visiting the place was something like this –

But, Khajuraho is not just about the huge temples and Kamasutra carvings, infact that is just a small part of this city of Gods. We learnt so much more about the place after visiting it, so here is my story. The name Khajuraho, ancient “Kharjuravāhaka”, is derived from the Sanskrit words kharjura = date palm and vāhaka = “one who carries”. The city was the cultural capital of Chandela Rajputs, a Hindu dynasty that ruled this part of India from the 10-12th centuries. The political capital of the Chandelas was Kalinjar. The Khajuraho temples were built over a span of 200 years, from 950 to 1150. Khajuraho has no forts because the Chandel Kings never lived in their cultural capital.

The whole area was enclosed by a wall with eight gates, each flanked by two golden palm trees. There were originally over 80 Hindu temples, of which only 25 now stand in a reasonable state of preservation, scattered over an area of about 20 square kilometres (8 sq mi).  The Khajuraho temples are made of sandstone. The builders didn’t use mortar: the stones were put together with mortise and tenon joints and they were held in place by gravity. This form of construction requires very precise joints. The columns and architraves were built with megaliths that weighed up to 20 tons. 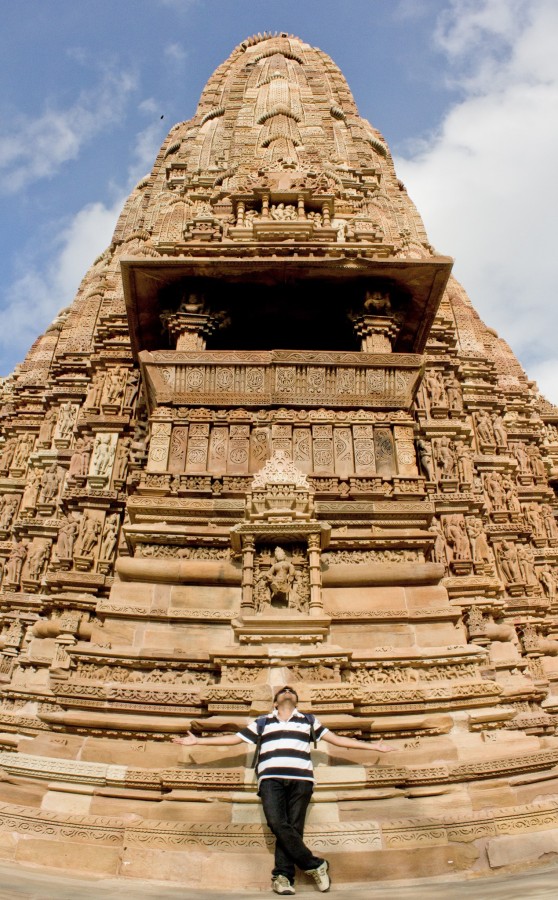 We started out in the morning from Jhansi in our Cab, but as usual, we were late on our schedule and had to rush up through the way to catch up. The driver Afzal was more than happy to fulfill our wish as he sped the Tavera. It seemed we had unleashed a chained beast, coz on our way, we nearly missed accidents by mere inches and on one occasion Afzal hit a small Goat which came in our way !

Thus, after rather a not so pleasant and memorable journey, we reached Khajuraho by lunch time. Since all the arrangements were made by my friend, Achal, we had our lunch and then had a tour of the Khajuraho Railway station. The railway station was made on the model of the temples of the city. The city of Khajuraho is home to only 20,000 people but still it has a airport and railway station of its own, which makes it the city with the lowest population to have such facilities. This alone explains the popularity and grand nature of the temples here. After our lunch, we headed towards the site of the temples and hired a guide for the tour. We told the guide that we are a group of students from BITS Pilani and Our guide over there told us that the Saraswati temple on the campus of BITS-Pilani, India, is modeled after the Khajuraho temple. Thus, we found a new and a rather old connection with the place upon visiting it. It just added one more reason, that why our decision of choosing Khajuraho for our last weekend trip was correct !

The founder of the Chandela Dynasty and builder of the early temples was Chandravarman. Reportedly he was the offspring of an encounter between Hamvati—a child widow and daughter of a Brahmin priest—and the moon god. The resulting pregnancy brought threats to her life and reputation, but the Moon god told her not to fear. Her son would be a great man and would also build numerous temples, lakes and gardens. Chandravarman did become a powerful and promising young man. According to legend, his mother once appeared to him in a dream and told him to build 85 temples and perform the ‘yaagya’ to expunge her guilt for having had illicit relations with the Moon god. With the aid of his father, the Moon god, Chandravarman became a great ruler, and his capital at Khajuraho was adorned with its glorious temples. There are three major groups of temples at Khajuraho: the southeastern group of Jain temples, the western group of Brahmanical temples to Shiva and Vishnu, and the northern group of Vaishnava temples. Our trip was limited to the Western group only, as that is the biggest and most well-maintained group and is a UNESCO World Heritage Site as well. The main temples at the Western Group are –

Kandariya Mahadeva temple sits just to the west of Lakshmana temple. Built in 1025-1050 AD, it is 30 meters tall and the largest in the Khajuraho complex. It is dedicated to Shiva and its name consists of the word “cave” (Kandariya) and Mahadeva, another name by which Shiva is known. The temple is considered to be the most impressive and refined in the Khajuraho complex, with over 900 sculptures carved into sandstone stacked without mortar. The vibrantly carved exterior contrasts with a very plain interior space that houses a Shiva lingam in the womb, or ‘griha’, of the temple located beneath the main ‘shikhara’ (spire).

Lakshmana temple, dedicated to Lord Vishnu, was built from 930-950 AD during the reign of King Yasovarman of the Chandella kingdom. It houses a sacred image of Vaikuntha-Vishnu brought from Tibet. Though the temple is one of the oldest in the Khajuraho fields, it is also one of the most exquistely decorated, covered almost completely with images of over 600 gods in the Hindu Pantheon. The main shrine of the temple, which faces east, is flanked by four freestanding subsidiary shrines at the corners of the temple platform. The temple is famous for the explicitely sexual carvings on the southern side of the temple, though these make up only a small fraction of the total. 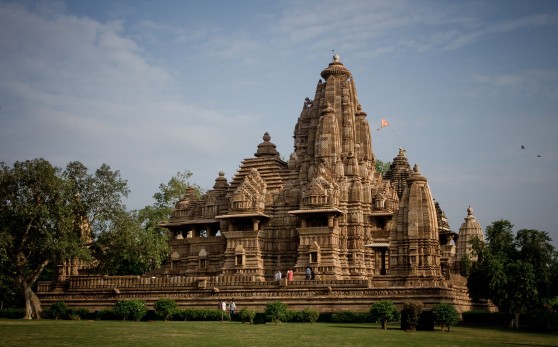 The Khajuraho temples do not contain sexual or erotic art inside the temple or near the deities; however, some external carvings bear erotic art. They portray that, for seeing the deity, one must leave his or her sexual desires outside the temple. They also show that divinity, such as the deities of the temples, is pure like the atman, which is not affected by sexual desires and other characteristics of the physical body. It has been suggested that these suggest tantric sexual practices. Meanwhile, the external curvature and carvings of the temples depict humans, human bodies, and the changes that occur in human bodies, as well as facts of life. Some 10% of the carvings contain sexual themes; those reportedly do not show deities, they show sexual activities between people. The rest depict the everyday life of the common Indian of the time when the carvings were made, and of various activities of other beings. For example, those depictions show women putting on makeup, musicians, potters, farmers, and other folk. Those mundane scenes are all at some distance from the temple deities. A common misconception is that, since the old structures with carvings in Khajuraho are temples, the carvings depict sex between deities.

After having a tour of the temples we headed towards the Raneh falls on the Ken river in the nearby forests. The canyons there are amazing and the place is a must-visit for all the tourists coming to Khajuraho. We spent the evening at the falls and returned back to the temples for the light and sound show.

The Light and Sound show on the Western Group of temples complex the reminds the life and times of the great Chandela Kings and mark out the story of the exclusive temples from the 10th Century to the present day. The 50-minute fascinating show is held in every evening and it runs in Hindi and in English. Amitabh Bachchan, biggest of Bollywood stars, narrates the story of the magnificient temples and his majestic voice attributes a special effect to the show. The tourism department organizes the show, which is not only entertaining but also very informative. The first show is in English that starts at 6.30 pm and the second show is scheduled at 7.30 pm in Hindi. The entry fee for domestic and foreign tourists differs by a slight margin. 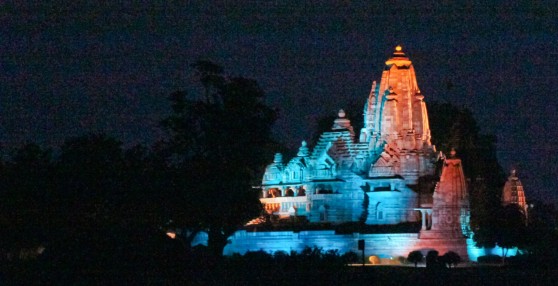 Simplistic debate has however advanced more theories. One of them suggests that the temples were an educational aid to adolescent Brahmin boys isolated from the world. Another one suggests, that the erotic sculpture was to appease the rain god Indra in order to prevent the temples from being struck by lightning ! Closer to logic, is another theory that attributes it to the tantric cult where gratification of baser instincts would blot the evils of the world and achieve deliverance. Bhoga (physical enjoyment) and yoga (spiritual exercise) helped attain nirvana. At the end of the day, whatever the origin, Khajuraho is a celebration of life in all forms. For a tourist or a traveler, it remains another memento on the travelogue of life. Yet another nirvana.

We had our dinner at a Corner Snack Joint – Madras Cafe. It was a typical Indian Restaurant where the owner was busy catering to the foreign (read American) tourists and had one of his workers for our group. After the dinner, we decided to head straight back to Jhansi as we had presentations the following day. Afzal, our driver was more conscious while driving at night, and we all reached back home safely !

One thought on “Temples of Khajuraho”