I was at Jaisalmer last weekend and I had gone there to attend the annual Desert Festival of Jaisalmer and what a trip it proved to be! Jaisalmer is one of the famous cities in Rajasthan and is a must stopover for any traveler. Jaisalmer is called the Sunhari Nagari i.e. the golden city as every building there is made using their golden colored stone as if the city is an extension of the golden colored sand present all around it.

The city is famous for its fort which is not an ordinary fort, atleast I’ve not seen something as grand at any other place. It is a traditional fort built from the city’s golden stone but is still used as a residential place by the generations of kings and priests who have been living here since centuries. There is an entire city inside the fort including restaurants, caffe, shops, a temple, a museum , a palace and ofcourse several houses. 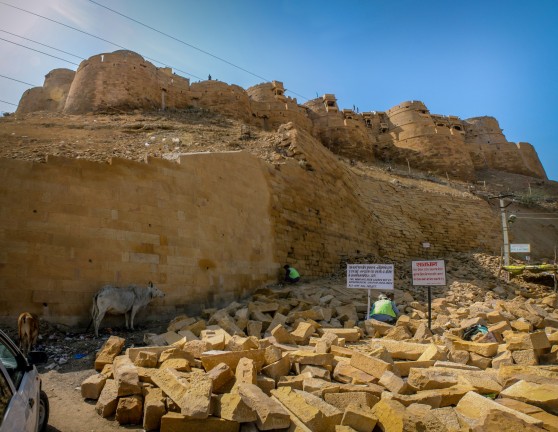 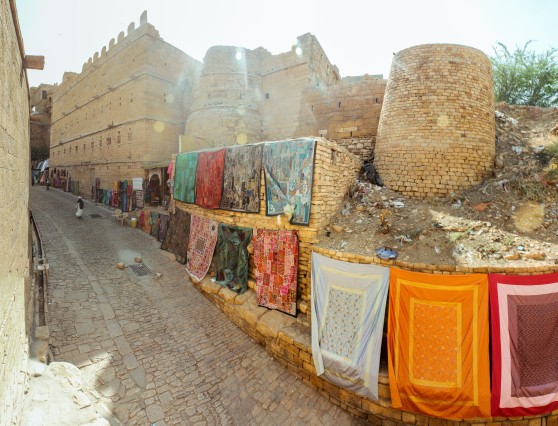 Apart from the fort, there are Royal Havelis to be visited and well what good is a desert city if there are no sand dunes! Jaisalmer has various small sand dunes in vicinity of the main city, the one that is closest and is most frequently visited by tourists is the Sam (pronounced as sum). 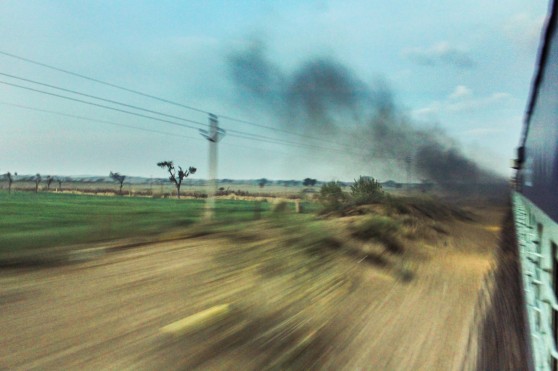 The journey started from Pilani where I and a friend (Ravi) decided to head to the festival at Jaisalmer for the weekend and explore the city as both of us had never been to Jaisalmer before. We started the journey on Saturday night at 1 AM and then traveled 600 km at stretch without any break to be there. Loharu, the nearest railway station to Pilani lies on the railway route between Delhi and Bikaner. We boarded the train coming from Delhi and heading to Bikaner and upon reaching there took a bus to Jaisalmer via Pokaran. The journey could have been better but on such a short notice and almost no planning, we got a fair deal as we didn’t have to wait for any connecting travel.

We reached Jaisalmer at about 4 PM and headed straight to book a hotel and adventure package at the sand dunes. We were lucky enough to get a good hotel and the whole package of the overnight stay at Sam including a desert safari, cultural programs, night stay, food, travel and other such stuff costed us Rs 2300/- per person. The hotel guy was kind enough to book our return tickets to Bikaner while we were enjoying our desert safari. My total spend on the trip came around Rs 3500/- and this is pretty decent for a weekend trip in my opinion.

Now, I have been to quite a few trips and photowalks, so I have an idea of how to prepare for any new location in terms of the preparation required for photographing that place. I did the same for this trip and I’ll share the links I had read on Friday night before before boarding the train. It can be really handy if some of these tips can prove to be useful at some point and mostly they do. You should always do some kind of planning and preparation of what kind of photos to click and how to adjust to the lighting conditions of a new environment like that of a desert. btw..I found my ND4 filter to be of great help!

So, we spent couple of hours on our desert safari at Sam which is around 50 km away from the main city. We went there in a cab and struck upon interesting anecdotes that our driver was telling us. One such story was of a stone that he had in his village Abu which has the ability to heal an disease and that’s why no one falls ill there. I was also clicking photos on my way from our car itself and got some good shots of the local buildings and landscape. The safari was a good experience and we watched the sun setting down from the top of a sandy hill. I won’t say it was an experience out of this world but it surely was a pleasant relief from the daily quagmire. 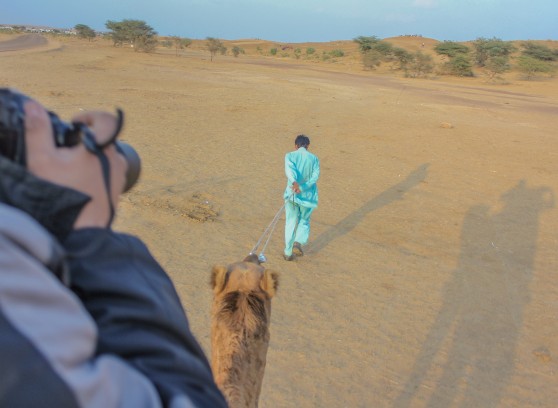 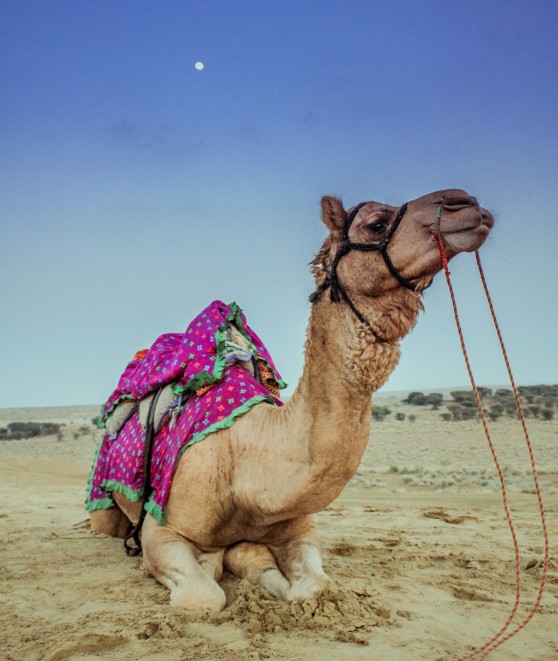 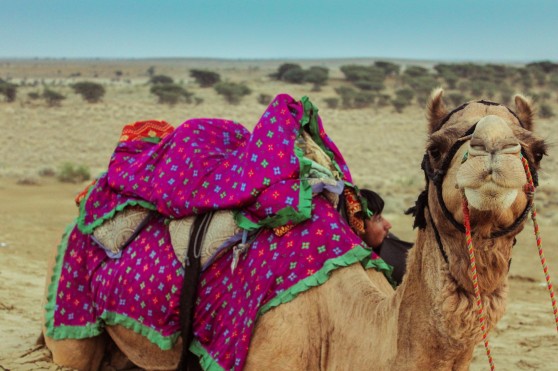 After all the adventure it was time for some culture and we had a dance and music program at the camps put up in the desert. It was a good show and the dancers performed some brilliant daring tricks like picking up a blade and a needle from her eyelids but I was too tired by then to enjoy the show, I was more keen on having the dinner and going off to bed. The dinner was a let down and those of you are planning to go, I’d suggest to take eatables like chips and cookies along with your cameras. Soon after the dinner, I went to our cottage and to our bed which was a quite comfortable. I spent the next couple of hours on my book – India : Vedic and Post-Vedic which is really a goodread if you want to understand how has Hinduism shaped up through the thousands of years of history that we have. Infact it is a monumental work that examines the complete fabric of Hindu religion and culture during the Vedic and Brahmanic periods. It takes a retrospective view of the progress of religious thought in India form the Vedic to the Brahmanic times.

Next morning we took off from the desert and went to the city to attend the annual desert festival. The festival was a delight to watch and the events really made the trip worth all the effort and travel. The program started off with a Camel dressing contest. 3 camels were competing for the title of the best dressed camel . Here they are… judge for yourself! 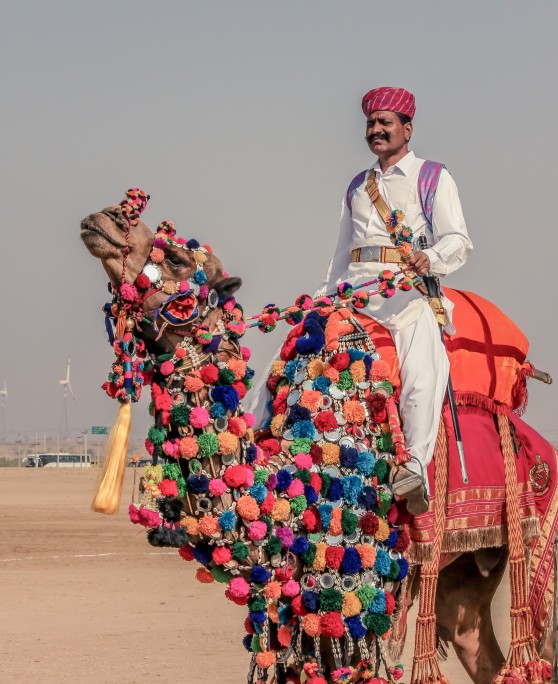 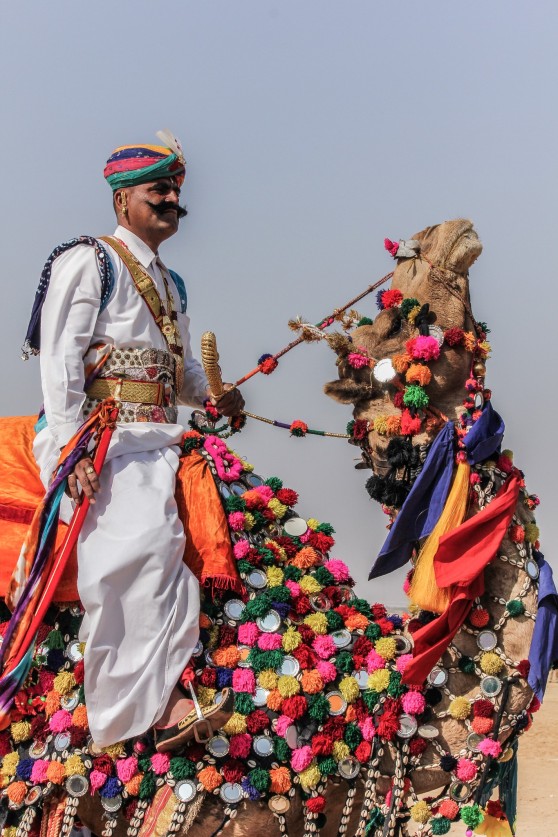 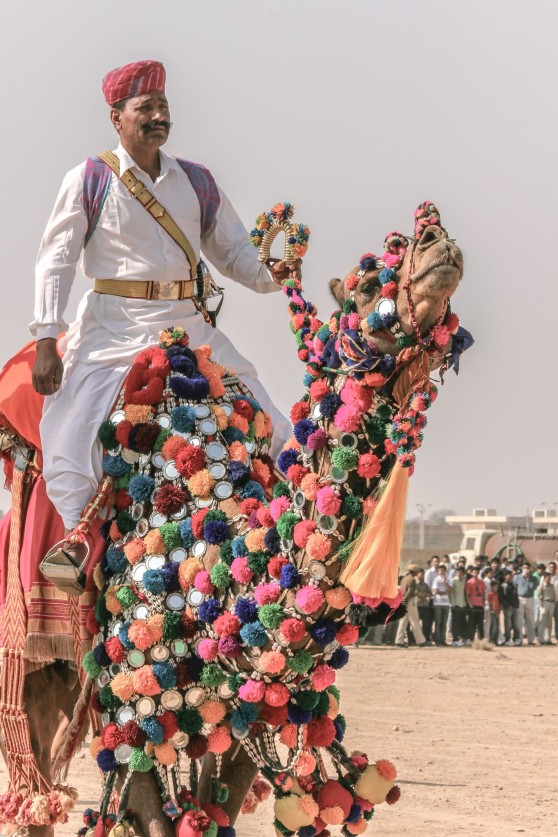 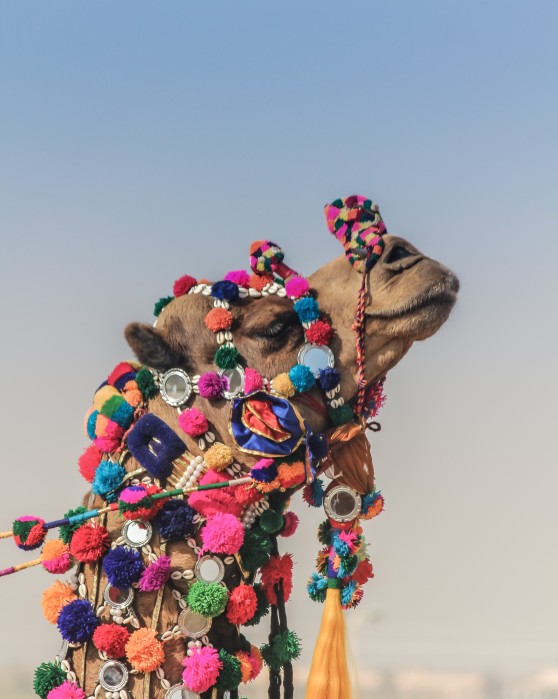 After this, it was the turn for tug-of-war between the foreign tourists who had come a long way to attend the event and the local Rajasthani men. The judges were seeing this as a contest between Butter and Desi Ghee but sadly the Indian team lost in both the male and female category. The tourists especially the women were really excited by their win! 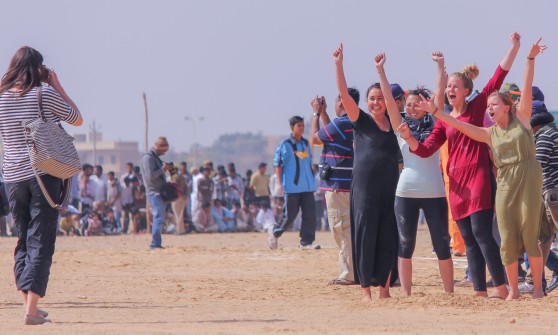 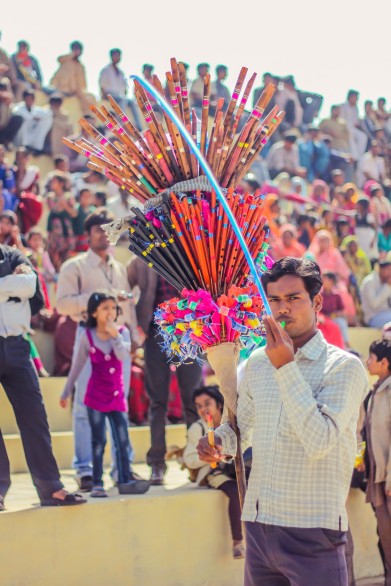 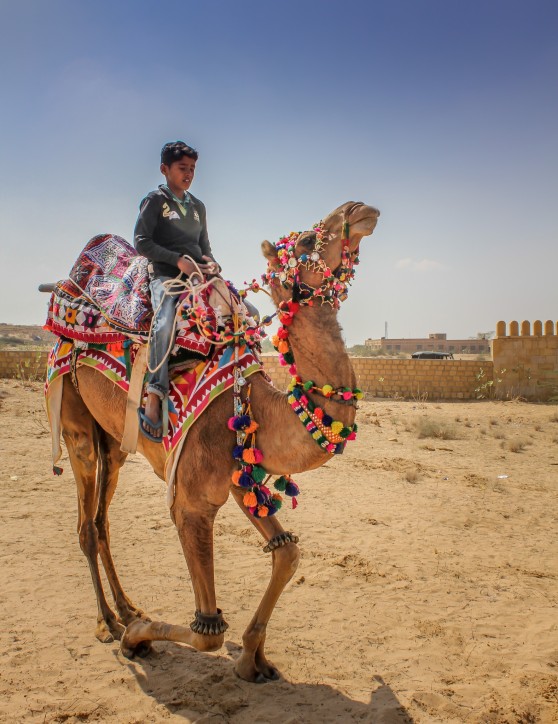 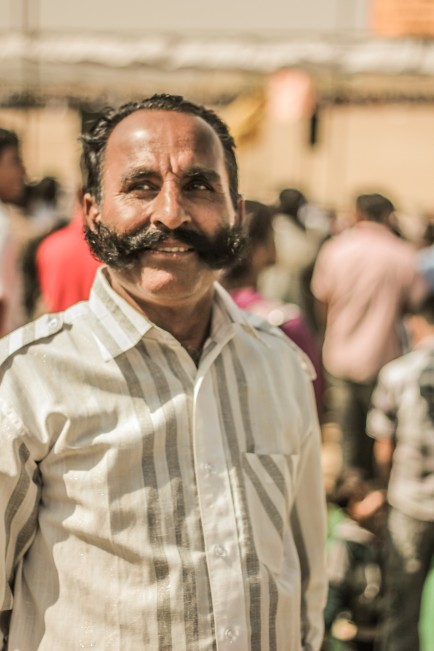 After spending almost 2 hours at the festival, we took off and headed to the local market for lunch. I was really hungry as the food at the camps wasn’t really good, so we decided to go for a full Indian meal of Paneer and Naan at Trio Restaurant. 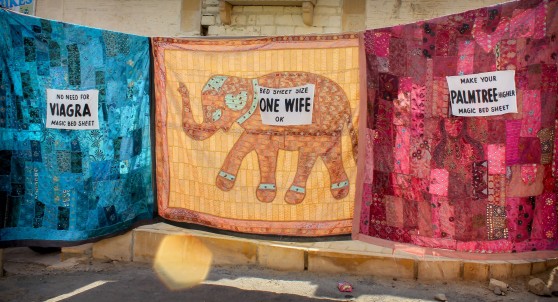 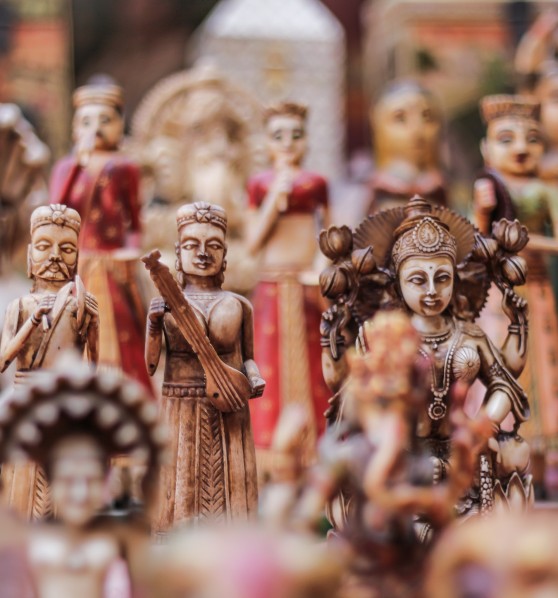 After the meal, we roamed around in the local market and got some souvenirs. Jaisalmer is famous for its local crafts and art so I brought a pair of hand-made leather sandals. After the walk in the market, we headed to the main fort and spent time over there exploring the architecture and the local shops inside the fort. I was clicking photos all this while and got some good shots of the people there. 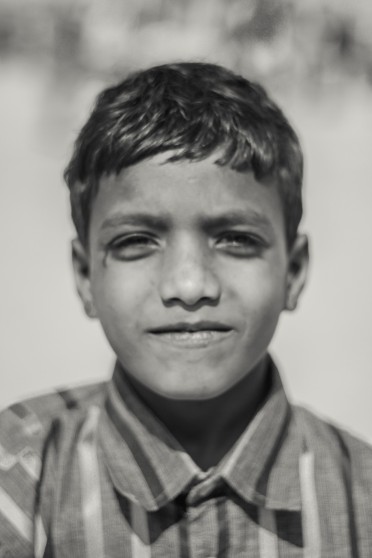 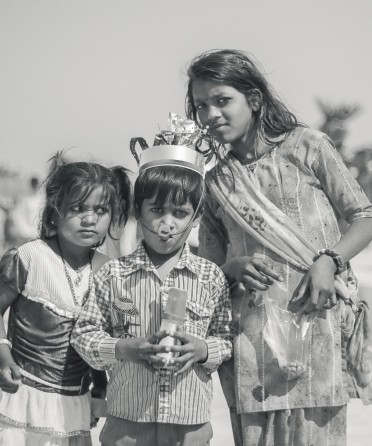 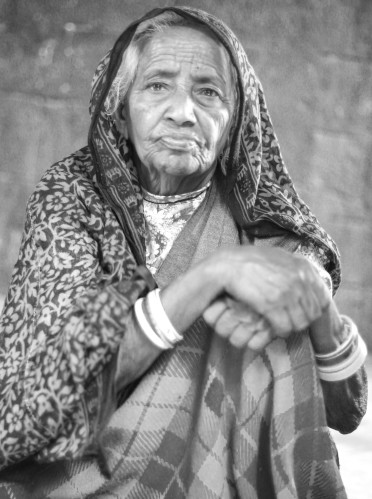 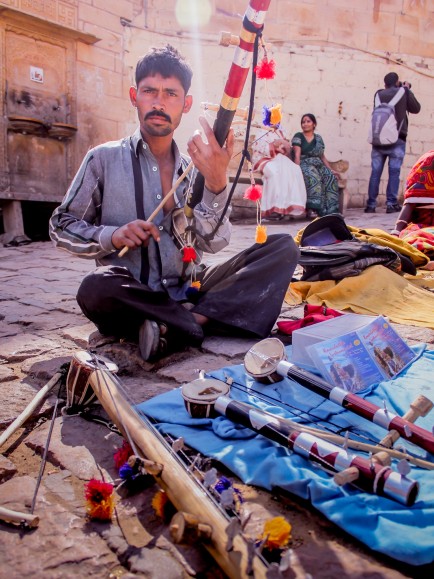 I purchased traditional kurta and afgani pyajams from the shops there whereas Ravi bought a painting from a local artist there. Apparently he is very renowned for his style of art and has even been featured on Television by the Fox History and Entertainment Channel, but I was impressed by the simplicity of his place and his humble nature. 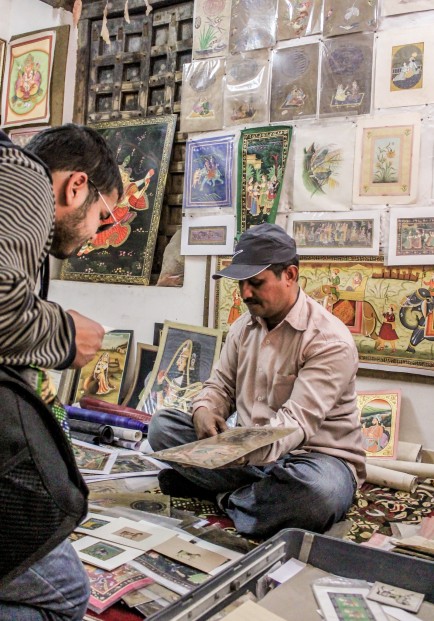 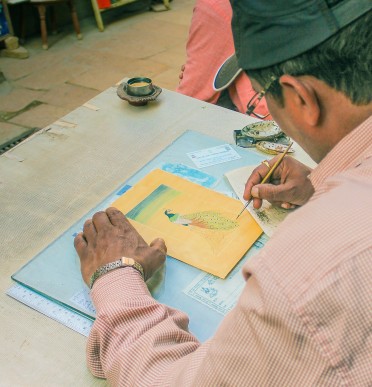 It was almost 4 PM by then and we returned to the Bus station for our bus to Bikaner and thus ended our weekend getaway to Jaisalmer. The journey was this was pretty much like the one we had while coming to Jaisalmer – 15 hours of sitting idle without any break! 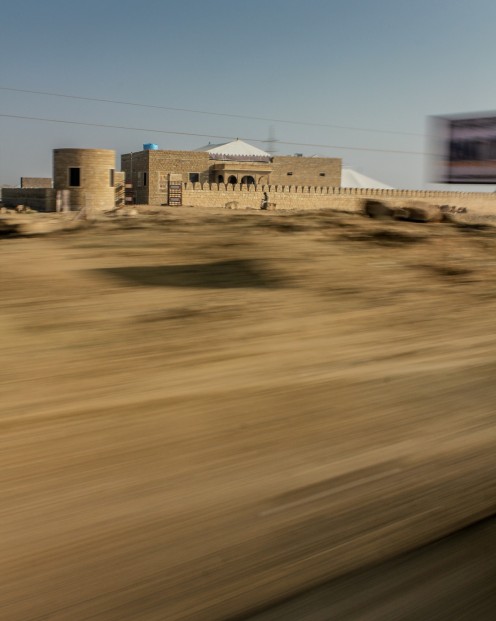 Jaisalmer is highly recommended for all kinds of trips but I would suggest you to plan your trip during the Festival season as the city was full of tourists and thus much more lively.