I traveled to Belur and Halebidu last month to visit the famous Hoysala temples in the 2 cities and what a trip it turned out to be! It was really good because of how much we were able to cover in just a weekend, i felt really happy with the shots i got there and it was a perfect weekend getaway from Bangalore. Plus, there is something new about this post, check out the photos and the sketches! yes! there are sketches below, that my friend Disha made during and after the trip. We covered the following locations on the weekend  of 8th-9th Feb 2014 –

But before I start writing about the trip, here is a quick history lesson on Hoysala empire to get some perspective. The Hoysala empire was a prominent Southern Indian Kannadiga empire that ruled most of the modern-day state of Karnataka between the 10th and the 14th centuries. The capital of the Hoysalas was initially located at Belur but was later moved to Halebidu by Veera Ballala II, one of the strongest Hoysala kings.  It is also believed that he was the one who laid the foundation of the Bangalore city. The Hoysalas began as subordinates of the Western Chalukyas and gradually established their own empire in Karnataka. Muslim dominance in North India was increasing at unprecedant rate at this time and Hoysala empire alone held the Hindu ground in South India for first 3 decades of 14th century. Veera Ballala III, the Hoysala king at the time, was killed at the battle of Madurai in 1343, and the sovereign territories of the Hoysala empire were merged with the areas administered by Harihara I in the Tungabhadra region. This new Hindu kingdom resisted the northern invasions and would later prosper and come to be known as the Vijayanagara Empire with its capital at Hampi, the place I had visited a few months ago. At their peak, the Hoysalas ruled over the following areas of South India –

While reading up on the locations, I landed upon this travelogue which really helped me get a perspective. Also this blogpost had some good shots that helped me prepare for the photography part of the trip.

But the first destination in the map above is Shravanbelagola, a Jain site which dates back to 10th century, a few years before the are came under the control of Hoysalas. The statue of Gommateshvara Bahubali at Śravaṇa Beḷgoḷa is one of the most important pilgrimage destinations in Jainism, one that reached a peak in architectural and sculptural activity under the patronage of Western Ganga Dynasty of Talakad. Chandragupta is said to have died here in 298 BC after he became a Jain monk and assumed an ascetic life style. Jainism in this place is 2000+ years old.

It was a long walk to the top of the hill where the statue is located, but since it was morning time and the first destination stop, we were brimming with energy, to the point that I was fast enough to skip alternate steps in order to climb up faster. I wasn’t equally enthusiastic while coming down and was already waiting to reach our main destination  – the temple at Belur.

We encountered some really good scenes during the travel from one city to another, I love watching the trees pass by from the car window, here are some good shots –

To read in details about the Hoysala temples, you wouldn’t find a better book than A complete guide to Hoysala Temples by Gerard Foekema. One thing that srikes out for Hoysala temples is their star shaped architectural plans. The Chennakesava Temple at Belur is a Vaisnava temple, i.e. dedicated to an avatar of Lord Vishnu – Kesava. The temple was commissioned by Hoysala king Vishnuvardhana in 1117 AD after a successful military campaign. The stone walls of the temple are ladden with intricate sculptures of various avatars of Vishnu and other Hindu gods. I particularly like the Narsimha, the avatar with head of a lion and body of a human. 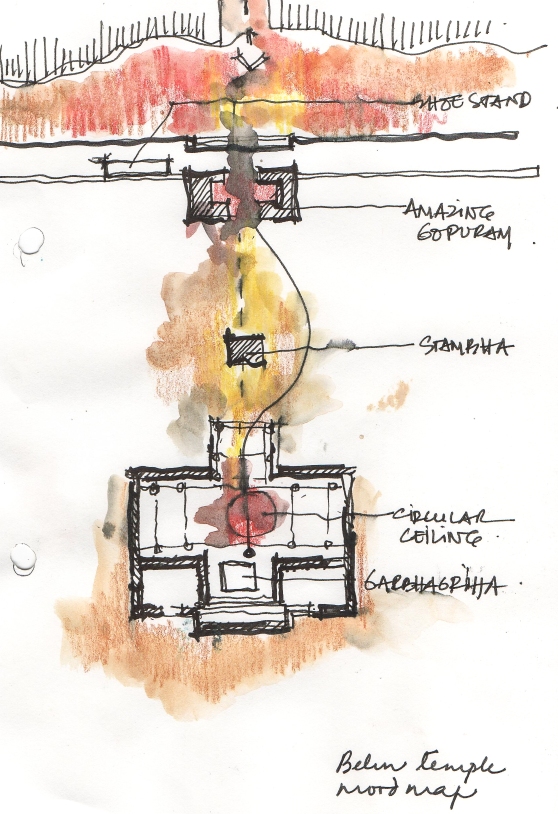 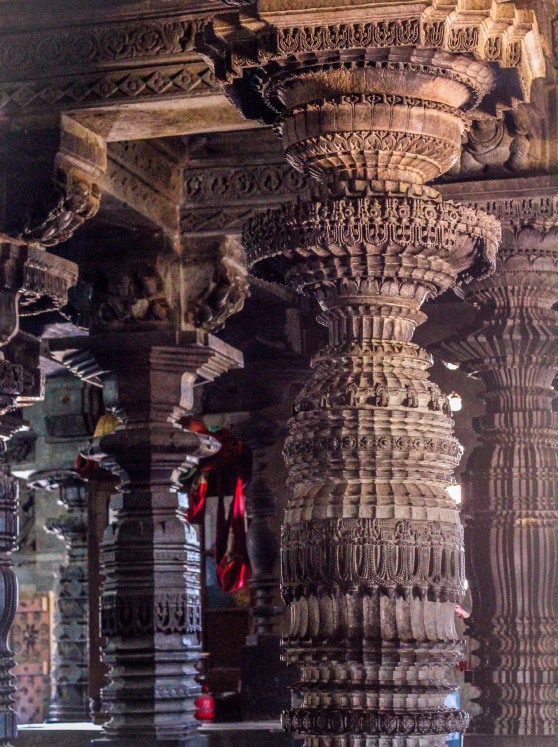 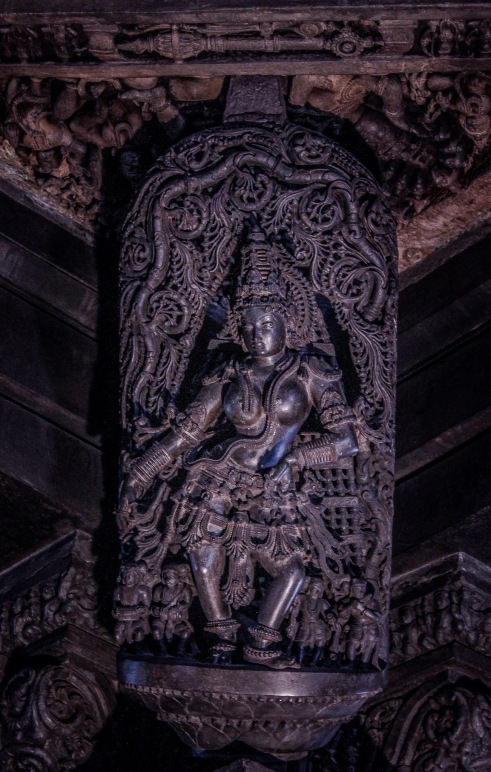 After spending almost an hour at the Belur temple, we moved to the Halebidu temple. One thing to watch out for at stone temples is the floor is also made up of polished stone, which gets really hot during day time. You may want to get something to cover your feet, an old pair of socks maybe! I would put the Hoysalesvara temple at Halebidu, amongst the top 10 in India, mostly because of the intricate sculptures found on the temple walls. No other temple in India shows the complete Hindu pantheon in such a lavish and successful way. This Shaivite  temple was built in between 1120 and 1150 AD. It has 2 shrines and the architectural plan is ingenuous in a way that from outside, it looks as a single big temple but from inside, the 2 parallel temple structures are very distinct. There are also smaller side structures, 2 of them for the monolithic Nandi bulls, a must for any Shaivite temple. Both the temples, at Belur and Halebidu were missing their superstructure, mostly damaged with time, so the roof appears to be flat, an unusual sight for temples in India. 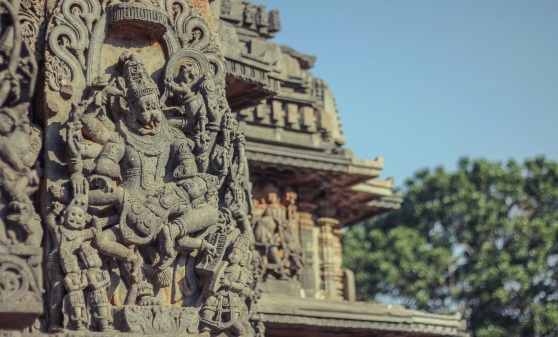 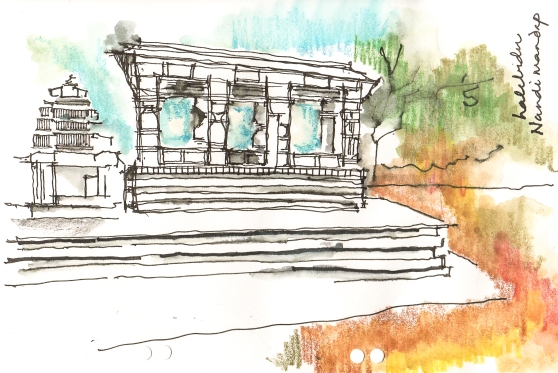 By the time, we convinced ourselves to leave Halebidu, it was 4 PM already! So, we could have covered only 1 more place, and we decided to head to the Viranarayana temple at Belavadi, built in 1200 AD. This temple has 3 shrines sharing a common hall, but it is evident from the design that it was made in parts and at some point the temple had only 1 shrine, the one in centre. The shrines and superstructures are all intact in this temple and we found this temple to be the one which had been kept most pristine, mostly because of its location inside a village, away from the highway and tourist maps. I even managed to get a shot of the temple priest in front of one of the shrines – Narsimha.

I was clicking photos from inside the car while we were heading to Chikmagalur for our overnight stay. Here are some good shots of the trees during sunset time.. 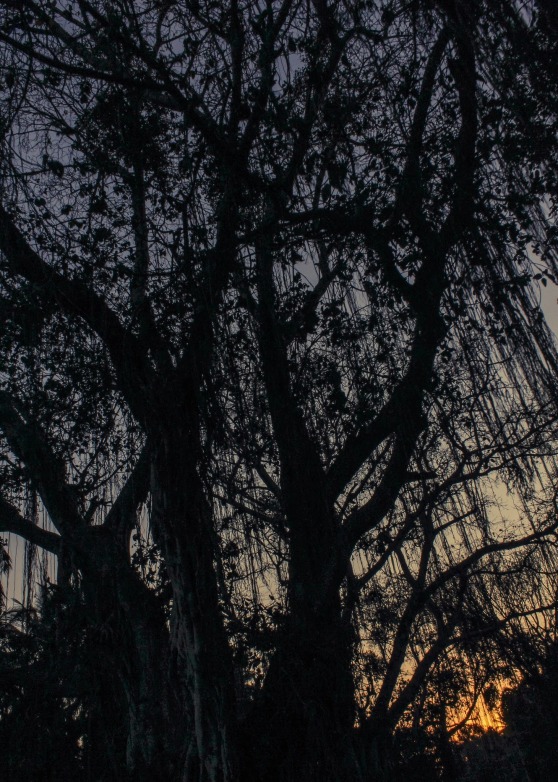 We had booked a room at the Hotel Rajmahal on Indira Ghandi Road in the city of Chikmagalur. The city is literally just settlement between 2 roads – Indira Ghandhi Road and Mahatma Ghandhi Road. We had some good sumptuous dinner, being tired from the long day. The speciality of the place was seafood, so we ordered a Mangalore freshwater crab!

So, this brings us to the end of the first day of the trip. The  next day was to be spent on natural beauty of the place we were at – Chikmagalur. The Govt. of India website on Chikamagalur gave us a good idea about the place. It even has 4 trip itineraries for travelers. We tried to base our trip on the 3rd one. We were present in the city at a wrong time as it’s most beautiful in monsoon season, but nevertheless, it didn’t damp our spirits, gettit? 😉

Chikmagalur is not about reaching a destination, which mostly would be a hilltop or a waterfall, the city is so picturesque, you just need to keep your eyes open, window panes down and there’ll be a instant calm smile on your face. But, I love clicking scenes, a lot of them with trees in the frame, from car window as they pass by, so I took many shots, was watching everything from the viewfinder, but trust me,  you should use your eyes instead, you’ll return a happier man!

We did reach a couple of hilltops, but really, I had seen better views and climbed higher places. Still, it was worth the effort and there is no regret. As they say, it’s the journey that matters not the destination! The best part is that all this was present at less than 100 kms from the Hoysala temples. We also stopped at a Kalahatgiri Falls, on the way to Kemmanagundi peak, a local festival of some sorts was being celebrated, so we went ahead, I got these nice candid shots of the people there. 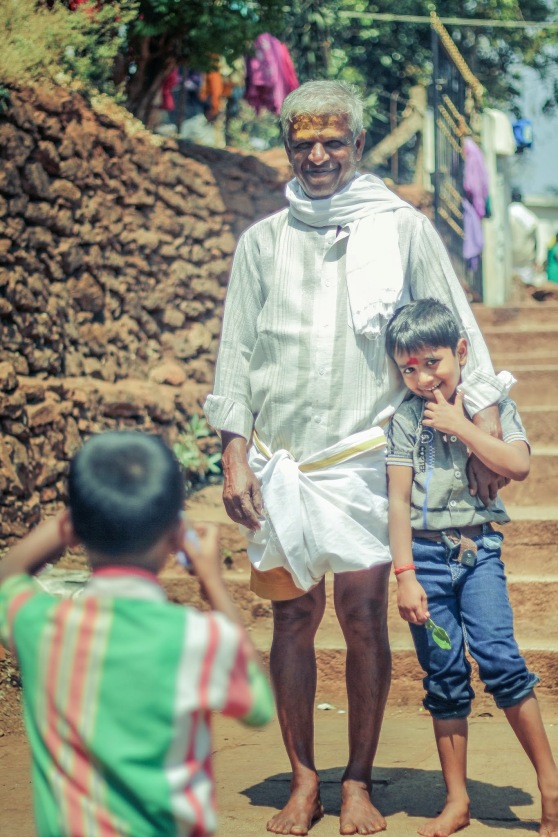 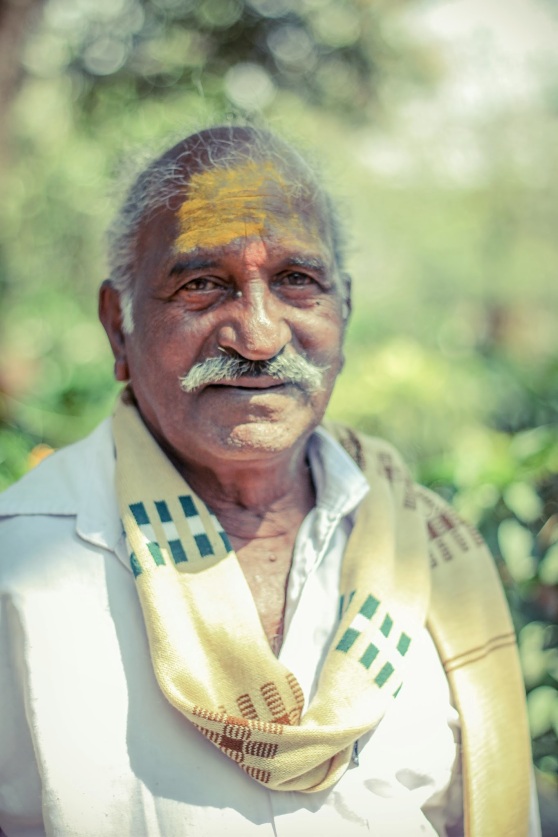 We did manage to reach the hilltop by driving further

From here, there is one more point we could’ve chosen – Hebbe Falls, but we were told that the falls are further 9 kms from Kemmanagundi and it’s not the best time to be there. We decided to visit the Hoysala temple at Amruthpura instead and it turned out to be a good decision!

Amrtesvara temple at Amruthpura is a Shaivite temple that was built in 1196 AD. It is a very well preserved temple and the superstructure is still intact unlike the temples at Belur and Halebidu. What I loved about the temple is that the Hoysala pillar design came out really well in the central hall of this temple. These are huge stone blocks which were turned and polished with crazy precision, I wonder what kind of lathe machines were used in 12th century that could make it possible! 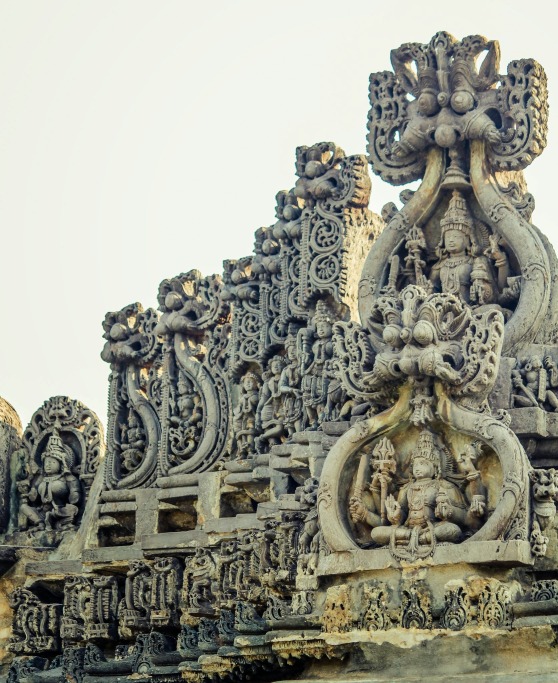 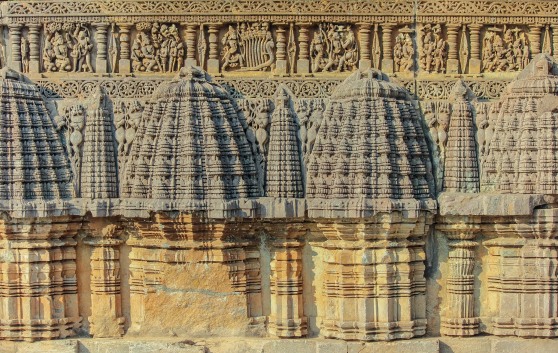 This brings us to the end of the trip, we headed for Bangalore from here and reached the city by Sunday night. It was a really a memorable experience. I would now try to cover other Hoysala temples whenever there is an opportunity, especially, the temple at Somnathpura.

Such a fun and picture perfect wedding it was! Loved the way you guys organised it! @a4ayushityagi @ketan_kap
Lovely weekend celebrating @nikshrivastava’s wedding
Ready, Pack the Dog, Go!
Back at a Hoysala Temple with @disha.sahu08
Holi 2022 with @anikakapil @ashritatyagi_ @snehakapil @disha.sahu08 @a4ayushityagi @ketan_kap
A trail/park seems to be getting developed around the Huskuru Lake. Hopefully the lake will be revived as well soon.