North and South India can be totally different cultures and it shows in celebration of festivals. Coming from the north,  Holi and Diwali are the biggest 2 festivals for me, but here in south, we pretty much don’t celebrate both. Instead, there are other festivals, some of which I had not even heard about before shifting to Bangalore.

Similar was the case for this year’s Holi. A lot of offices were open and one didn’t feel anything different about the day. I actually shouldn’t be complaining so much as I was in a good enough state to have the day off from office and even better so because it was a Monday, so I had a 3 day weekend at my disposal. I had my friend, Disha,  take the day off from her office to join me for yet another trip and this time we decided to cover Tamil Nadu. Since we had 3 days and no agenda as such, we decided to cover the maximum distance we could. After much debate and reading up of blogs, we decided to cover the following 3 cities in our 3 day trip – Trichy –> Madurai –> Tanjore. Other close contenders were Rameshwaram, Mahabalipuram and Kanchipuram but we had just 3 days, no more. It turned out to be a good decision as we were able to extend the trip on day 3 (from Tanjore) to another closeby city – Kumbakonam.

After much reading and re-reading of the history of South India, I finally have some sense of the many dynasties that ruled the area and in which timeframes. Speaking about the places that we visited, the earliest recordable mentions of the cities of Trichy and Madurai date back to around 3rd century BC. Let’s get the needed perspective before we move onto architecture and the places we visited –

Tamil Nadu had always been ruled by multiple dynasties at any point in time. The smaller southern part was the stronghold of Pandyans. The bigger northern part was earlier in control of Cholas till around 2nd century AD and then in the control of Pallavas, who ruled both Tamil and Telugu areas. The frontier between these north and south Tamil territories was Kaveri river. Cholas were driven into a complete oblivion only to return to power in 9th century AD and but this time they gained control over not just the Pallava territory but also the Pandyan territory. However in 13th century, Pandyans returned to power, overthrew the Cholas and regained not just their territory but also the Chola territory.

But interestingly, by the 13the century, Hindus were not the only ones fighting for power. Around this time, whole of India was being raided by Muslim Sultanates of the west and the rule of the great Indian dynasties faded away. The Vijaynagar kings of Karnataka however took lead in re-establishing a Hindu empire and the areas previously under the Cholas and Pandyas came under the rule of the Vijaynagar empire. The Vijaynagar empire was defeated at the hands of Deccan Sultanates and the control shifted back in Muslim hands but not completely as some of the areas were being ruled by Nayak kings, who previously were feudatory to Vijaynagar empire. To take back the control of the land under Hindu kings, this time, Maharashtra took lead as Marathas captured large part of South India back in their hands. Interestingly, they themselves had started out as feudatory to the Deccan Sultanates. But by now European powers, mainly English and French had entered the scene to gain control over the area. Britishers defeated Marathas and resisted French to took over the areas of South India. Finally, only in 1947, the area came back under the Indian rule. This is probably the smallest history lesson one can get on Tamil Nadu, hope it did some good and not just confused you further!

Speaking of cities, Trichy was the capital of early Cholas, but when Pallavas took control of the region, the capital remained at Pallava stronghold of Kanchipuram. Madurai had always been the capital for Pandyas. Cholas after re-emerging in 9th century established Kumbakonam as the capital for a brief time. The capitals kept shifting with kings but Tanjore was the one which is most famous. Beyond this, the region never had strong local rulers, and was ruled by foreign powers mostly from central India which later paved way for Britishers who clubbed the Southern territories under Madras Presidency.

Ok, now let’s start the journey.. The trip, as I said, was for 3 days and we covered the cities in following order   –    Trichy on Saturday –> Madurai on Sunday –> Tanjore and Kumbakonam on Monday. In total, we visited 8 sites, 2 per city, which covering individually would’ve been a stretch but when I look back, I think we did pretty good. I had initially thought of posting about the whole trip in a single mega-post but then it would’ve been too much of scrolling of the mouse, so I’ve decided the post into 2 parts – Day 1 and Day 2 & 3. The places we covered are listed below –

Let’s cover the cities one by one… Trichy is well connected to Bangalore (and other big cities nearby) and one can easily find overnight buses that reach Trichy in early morning. Trichy  is an old city, well atleast when you’re coming from Bangalore. It’s best to stay close to rock fort area. There are regular buses from bus stop to the monument. Well, there are only a few sites to look out for, so you’d know the names and location by the time you’re done with your planning. So, we booked a hotel which was close to the main attractions at the city and covered all three sites on the first day itself as expected.

Sri Ranganathaswamy Temple, the biggest operational Hindu temple in the world! Here is the list of the 10 biggest Hindu temples, incase you were wondering.. The temple is spread across 150+ acres of area and has a whole city inside its walls. Well, it’s no simple temple structure, there are 7 concentric walls that surround the shrine and in between each wall, you’ll find people living their daily lives. There are shops and even lodges to stay in between the first (outermost) wall and the second wall. Each of the walls have huge entrances gateways – Gopuram. This is no ordinary temple, it’s a temple city! There are 21 gopurams among which the outermost – Rajagopuram is the largest one. The 72m high 13-tiered Rajagopuram was built in 1987 and dominates the landscape for miles around, while the remaining 20 gopurams were built between the 14th and 17th centuries. Below are the pictures of the Rajagopuram..

A closer look at the straight lined patterns, both me and Disha found this gopuram to be better than the overly complex gopurams at Meenakshi Temple in Madurai. 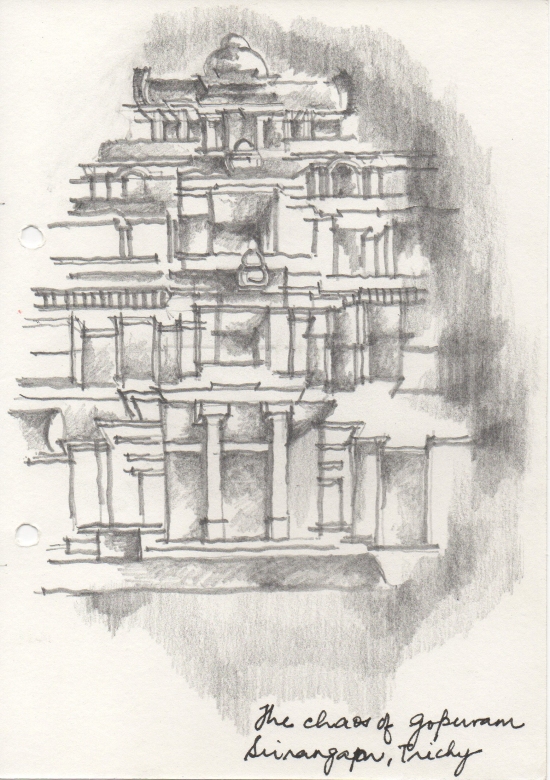 And here is Disha’s rendition of the Gopuram’s elevation

After crossing the first gate, one can see that there is a complete city inside. The gate that you see in  the photo below is not the main gate but the one after that..

There is an interesting story that I came across while I was reading up on the place. This blog said that it is believed that after Rama defeated Ravana, he made Ravana’s brother Vibhishana as the King of Lanka. Rama was having this little sculpture of Ranganatha (Lord Vishnu) which he gave to Vibhishana before bidding adieu to him. He was instructed never to keep the idol on ground on the way and to keep it down only when he reaches Lanka. On his way to Lanka, while passing through Trichy, he gave the idol to a local shepherd boy for a few moments when he went for some chores. The boy couldn’t bear its weight for long and he kept it down. On coming back, Vibhishana could not remove it from the ground. This sculpture got permanently fixated here and this place where Ranganatha resides became Srirangam. Upon prayers, Lord Vishnu appeared before him and said that He’s prefer to stay here, however his glance would be towards Lanka, That’s why this is a south facing temple. Another interesting thing that I found out at Trichy was that the below symbol, used by Iyengars, is the symbol for Vishnu, not sure if this is followed up in north!

Here are some more shots of the people and places inside the temple.. 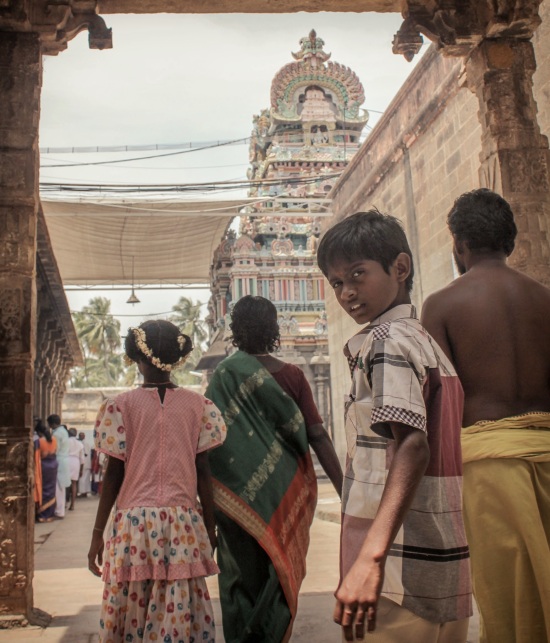 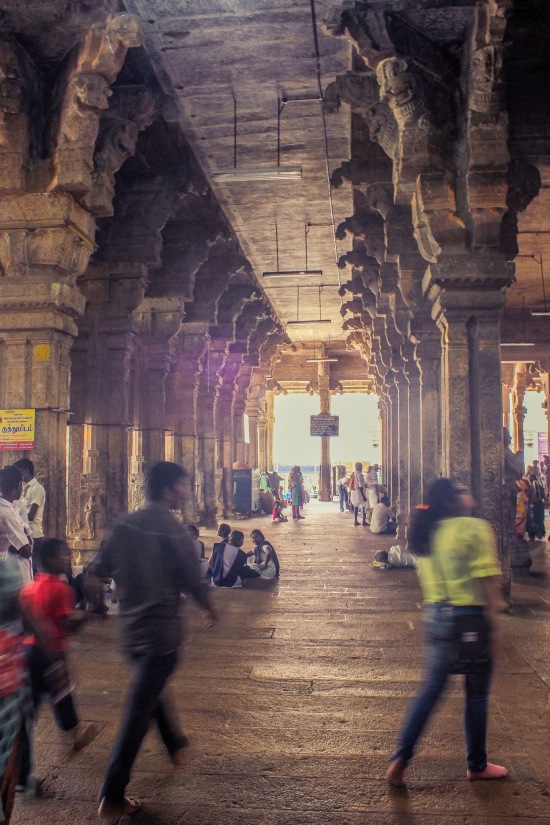 Here is the sketch that Disha was working on while I was clicking the photos.. 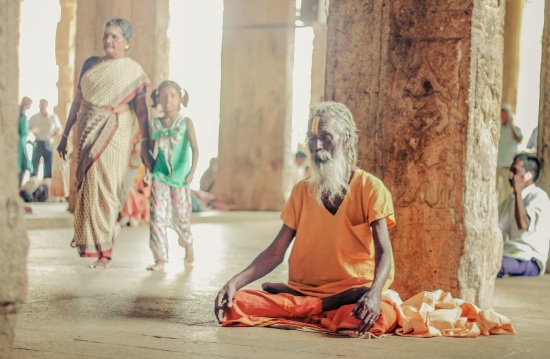 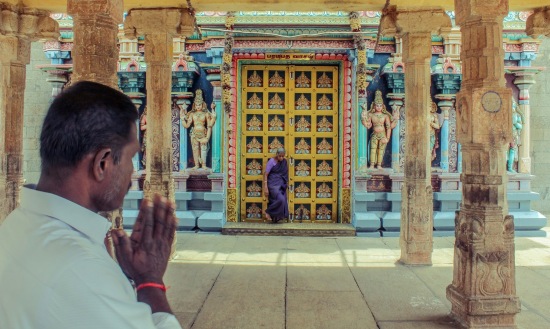 Sagar manthan (legend of the churning of the sea to get the immortality potion) depicted in the gopuram below..

We obviously couldn’t cover all the shrines inside the temple complex just because there was too much to cover. Also, neither of us was here to pray, we were more interested in the architecture and exploring the history and culture of the place, so we skipped places wherever we found long queues. After exploring Srirangam for good 3-4 hours, we took a local bus to Thiruvanaikovil to visit the Jambukeswarar Temple. This temple is famous for being one of the 5 sacred elemental temples of Shiva. Below is the gopuram of the temple..

Below is what Disha was doing when I clicking the temple, sketching the Rath

One odd thing about these temples is that none of them had a regular floor plan since they were constructed in parts and over long time by many different kings belonging to different empires. So the floor plan ends up looking like that of a maze rather than a big worship hall. There would be rooms that lead to a section of the temple as big as the ones you’d have just covered. There are many extensions to the original enclosure of the shrine. Each sections would then have its own nitty gritties such as ceiling patterns, curtains, architectural motifs, Shivalingas. Below is the photo of  a row of Shivlings at the edge of one of the walls of the temple.

Another famed landmark in Trichy is the 83 m high rock which is the only outcrop in the otherwise flat land of the city. The most amazing fact about the rock is that it is said to be one of the oldest in the world – approximately 3,800 million years, which makes it older than the Himalayas. There are a couple of small temples situated on the top of the temple but I had read that the temple were not really architectural wonder and we decided not to go up the 500+ stair steps. Also, I was not very impressed by the city of Trichy as such and had not much hopes left that the rock fort temple could turn the situation around. But still there were a lot of good things as well, like this painting that was present on the ceiling of one of the temples inside the bigger temple completes at Thiruvanaikovil. 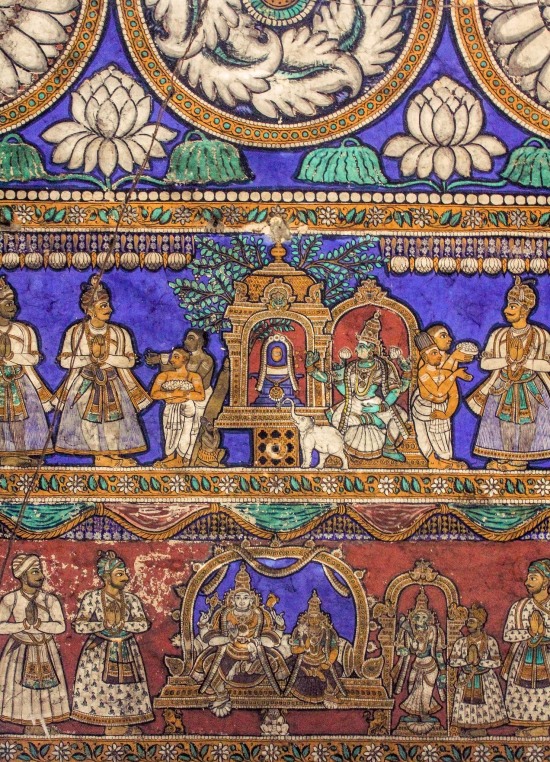 We returned back to the hotel by evening, rested for a while and then went out for dinner. The whole city it seems is located in the vicinity of the rock fort and we decided not to explore further at night. We had dinner at one of the local restaurants and called it a night. We had to get good enough rest as well because we were to leave early morning next day for Madurai. This brings us to the end of Day 1 of the trip. As I mentioned earlier as well, I’m splitting the trip post into 2 parts – 1st post that had the elaborate introduction and then the exploits from the city of Trichy! Following this post is the post on adventures of Day 2 & 3. See you at Madurai!