The Deccan produced some of the greatest Dynasties in Indian History like the Satavahana dynasty, Vakataka dynasty, Chalukya dynasty, Rashtrakuta dynasty, Western Chalukya Empire, Vijayanagara Empire and Maratha Empire. What is missing from this list is the Bahmani Sultanate which too emerged and became obsolete in the deccan soil. It is partly true to say Bahmani Sultanate was a deccan sultanate because the campaigns it started, battles it fought took place here and partly untrue because the rulers were muslim sultans from the outside world, only the subjects were Indians.

It was the hot month of April when I decided to explore the 4 close-by cities in the deccan region. There were many threads that connected these erstwhile capitals of kingdoms to the places I already had been namely Hampi and Aurangabad. I would connect these dots as I progress with each of the cities. For now I can say the trip post is divided into 2 parts – Bijapur being capital of the Bijapur Sultanate was to been in a different light as compared to the other 3 cities which were part of the Chalukya period, Badami being the capital city.

This time my friend Anshul had joined me for the trip, he still is unsure of how and why he agreed for the trip as he couldn’t connect to the place but still it was good for me to have him around! Although he was cursing me the whole time for making him walk so much on a weekend! 😀 It was a 3 day trip which started from Bijapur followed by Pattadakal and Aihole on day 2 and finally Badami on day 3. Let’s move on to the history update! The part on history update has become something that I personally really like as it really helps in connecting with a heritage place. There is no sense in clicking pictures for instagram unless you know the background to it, hope you guys are finding it useful.. Let me start with Bijapur as that’s the place we visited first, I’ll come to Chalukyan history in part 2 of this post!

In the 14th century the Muslim Bahmani Sultanate and the smaller Sultanate of Khandesh ruled much of the northern Deccan, while the southern part was controlled by the Hindu Vijayanagara Empire. The Bahmani Sultanate disintegrated in the late 15th century, breaking up into the Sultanates of Ahmadnagar, Berar, Bidar, Bijapur (the Adil Shahi Dynasty) and Golconda (the Qutb Shahi Dynasty).

There is a lot more to talk about, but without going into further details, let’s have a look at the city of Bijapur, which emerged as the biggest and richest one in the Sultanate. The city as such existed before the Adil Shahi dynasty, infact the foundations were laid centuries ago by the Kalyani Chalukyas (descents of the Badami Chalukyas, from the city of Badami, where we’d be going next) and was known as Vijayapura (City of victory). The city changed hands and became part of the Khilji Sultanate during the second part of the 13th Century. In 1347, the Bahmanis of Gulbarga took over the sultanate from the Khiljis only to be split into 5 states, known as the Deccan Sultanates, with the Adil Shahi taking control over Bijapur. But yes, it would be right to say that the city of Bijapur owes much of its greatness to Yusuf Adil Shah, the founder of the independent state of Bijapur.

Today, when you come from a metropolitan city, Bijapur would seem like a distant town that is ages behind, the roads are narrow and littered with cow dung and plastic wrappers. It’s not the best idea to explore the city on foot, your best option is to just cover all the monuments you can without dehydrating yourself in the summer heat. This was one trip where we were running for water after almost every monument visit.

The first place that we went to after getting down from the bus stop were the Jod Gumbaz. Hemispherical domes really dominate the skyline of the city, and emerged as the typical architectural style to be conceived by the Adil Shahi dynasty. Jod Gumbaz are 2 twin structures and it was as if they had been constructed just to perfect the art of making Gumbaz as otherwise, there wasn’t much to see around the 2 buildings. 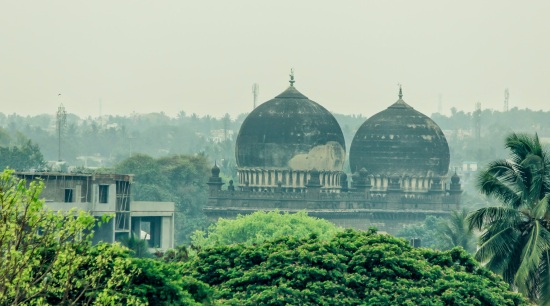 We moved forward, still on foot, towards the main road and after a few turns, through the internal roads, we happened to be near the famous cannon at Bijapur – Malik-e-Maidan (The Monarch of the Plains). It is the largest medieval cannon in the world. It is said that after igniting the cannon, the gunner would remain underwater in a tank of water on the platform to avoid the deafening explosion.

The cannon is placed on a raised platform which once was the part of the outer walls of the city. Now these walls have been brought down at many places to extend the roads. In the picture below, the green patch you see is a post on the city walls where the cannon is kept. Ahead of it used to be the moat but the modern city spread over its walls like grass grows over old buildings.

Bijapur thus has this unique situation where the old fort walls and the modern signboards can be seen together as if history has been augmented over the reality.

We asked around to figure out where our next destination should be and we were told that Ibrahim Rauza is closeby. It infact is outside of the old city walls, thus when it was constructed it would have been far away from the city, but now lies as part of it. Ibrahim Rauza (A.D. 1626-A.D. 1627), a mausoleum was built on the orders of Ibrahim Adil Shah II. It is an important building which for its “technical accuracy, and skilled artistry. It consists of two buildings, a tomb and a mosque. The tomb considered as the most ornate building in Bijapur, consists of a square chamber, surrounded by a double row of arches forming two open colonnades. 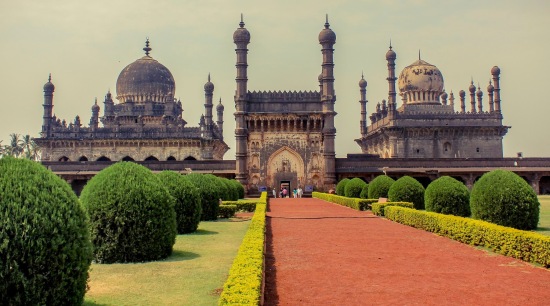 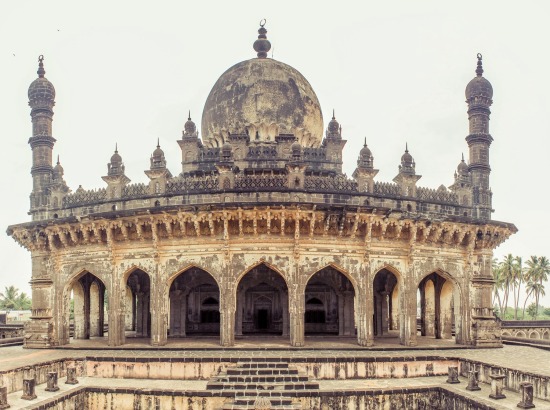 Another interesting thing that our guide told us was that there exists a maze below the foundations of the building which was to serve as the escape route for the Royal family incase of an attack. What you see as the pattern on the door which leads to the tombs, below right, is actually a map to this maze! 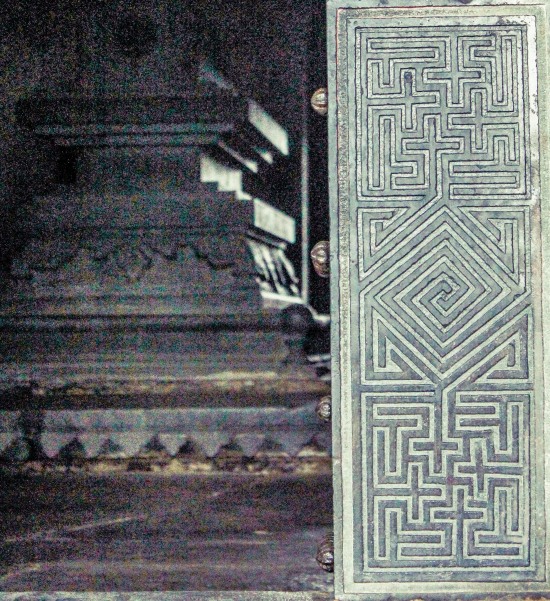 We learnt quite a few interesting things about architecture as well from our guide. A mausoleum is called a rauza and not a maqbara when the husband dies before the wife. This is what happened with Ibrahim Adil Shah II, he died before his wife and it was his wife who got the building completed and was then later buried besides him. Also, this being one of the earlier grand scale buildings to be built by Muslim kings, it shows how Indo-Islamic architecture was shaping up during that time. The domes although present only in Islamic architecture, not in Indian, were actually built in shape of a Kalash (metal water pots used in Hindu temples during prayers) kept over a lotus flower. This style grew with time and all the domes from here onwards were built in the same fashion. This is clearly visible in the small dome over a tower in the picture below –

Gol Gumbaz too is built in the same fashion, just much bigger! That’s where we were headed next, we took a bus as Ibrahim Rauza and Gol Gumbaz are at 2 ends of the city and infact had to further walk a lot from where the bus dropped us.

Gol Gumbaz is the largest dome ever built in India, next in size only to St Peter’s Basilica in Rome. It is the mausoleum of Mohammed Adil Shah, the greatest king that ruled Bijapur. He was successful in maintaining good relations with the Mughals in the north, Shah Jahan at his time, and the Sultanate was at its zenith under his rule.

One thing that really struck me was that the side towers of the building looked very similar to the bell tower present in Tanjore from the last trip. 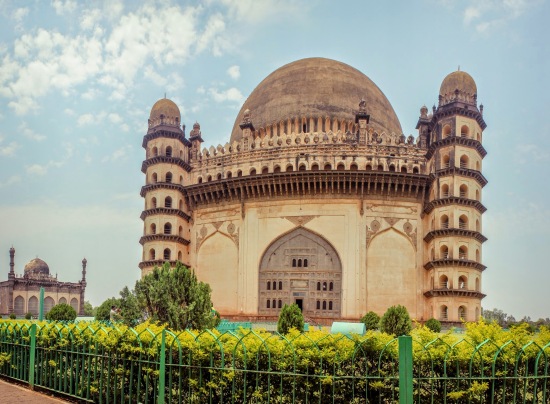 Eight intersecting arches created by two rotated squares that create interlocking pendentives and squinches support the dome, seen in the picture below. It is said that because of its unique design to allow the sound to echo within its walls, one can hear reverbations upto 7 times!

The museum besides the main building gives you a really good background on the Sultanate. You can see the family tree, coins, weapons, painting styles and other artifacts that belong to the medieval ages. You also get really nice views of the city from the top of the dome, here is the Jami masjid as seen from the Gumbaz, amongst the other buildings that have cropped up in the city – 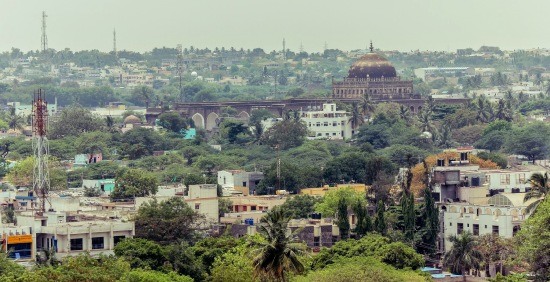 We went to other smaller places as well, but a lot of them were in really bad situation, with dilapidated walls, paint chipping off and stagnant water that must’ve been harboring insects with potential diseases. Bijapur definitely is in need of some serious conservation work, otherwise I don’t see how the heritage buildings would survive another century of this paralysed existence in modern world.

We were now ready to move on to our next destination – Badami, and to our surprise, there was a train that was leaving for Badami in the evening from Bijapur. WE boarded the train and off we were! The journey continues in the 2nd part of this post…

We chose an eco-friendly resort for a small budget-friendly wedding that was more of a vacation for my extended family traveling to Odisha. We did it in our style that included planning it on notion, designing our outfits, cycling, live music, impromptu dancing, kite flying, beach walks, temple visits, and a mix of regional customs.
Summer Days
Did this trip across Tamil Nadu same time 7yrs back with @disha.sahu08
Long walks in berkinstocks
Side Trip
Looking back at photos from Auto Expo 2012 - Toyota had just launched Etios brand, Tata was still hopeful for Nano, and BMW was just a dream, it still is!