Skip to content
I’ve just come back from Yatra, yes, that’s what I’ll call it… After being on bed for about 20 days and not being able to walk all that time, this was a pleasant and much needed comeback trip! About the not being able to walk – I had an accident, broke my left arm and left foot, infact fractured my left foot and thus had been a little less active.August was kind of tiring for me and attending designyatra was the perfect getaway to get some inspiration and motivation to carry on with what I’ve decided to pursue. But now I’ve decided to put up a post on the events of August, I guess it would be fun to read this post after 10 years, the future me would be smiling at this after 10 years, I know 😀
More on Design Yatra and Goa adventures on the next post, till then this is how I managed to have a major road accident after many years of driving but got lucky to be back to my regular self in about 20 days. 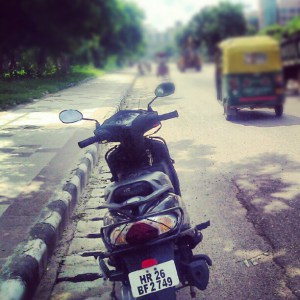 I was traveling all fine in my middle row when an auto took a sharp wrong turn and suddenly came in front of me… I tried avoiding the collision and managed to avoid a direct smash.. but then i skidded on my left side and my arm and leg got under the bike while I was skidding down the road. The Auto guy fled the spot as soon as he saw me skidding and it was kind of expected, that’s what people do here! But, anyways, I am thankful for the people who got me up, made me settle on the footpath, gave me water, parked my bike. I couldn’t see their faces properly that time, I was a little dizzy, but yes, I am really thankful to them. I went to a hospital with my father after that and things shaped up from there, since then I have been telling this story to everyone who asks me about my accident, I’ve had ankle pads, crutches as time progressed, I think I’m lucky that my hairline fracture didn’t need a plaster to get better. I dont know how good an idea it is to write a blog post on the accident…

Anyways, I am back on road now, after 1 month and 3 days, I started driving that bike again and drove the same route till the metro station, took the metro and went to the office just like how I used to before the accident. It felt good that I had no problems in getting back on road, although I had forgotten about the Gurgaon traffic, so that was kind of a bad part, but rest is back to “Normal”