Judging from the erratic frequency of my posts this year, it is only logical to assume that something has changed drastically, so it is time to let the cat out of the bag! I quit my job at ExxonMobil earlier this year in March and shifted back to Gurgaon, my home city. It was a rather short sentence for a change of phase in life, but actually that’ how it went! Although it was my first job change, but it seemed like I already knew what was to be done, how to do it and the adrenaline rush was short-lived. Won’t say that it was an easy decision, as I do miss my life in Bangalore, but it does seem like the right move for many reasons. Why? this cartoon strip sums up the story very well – 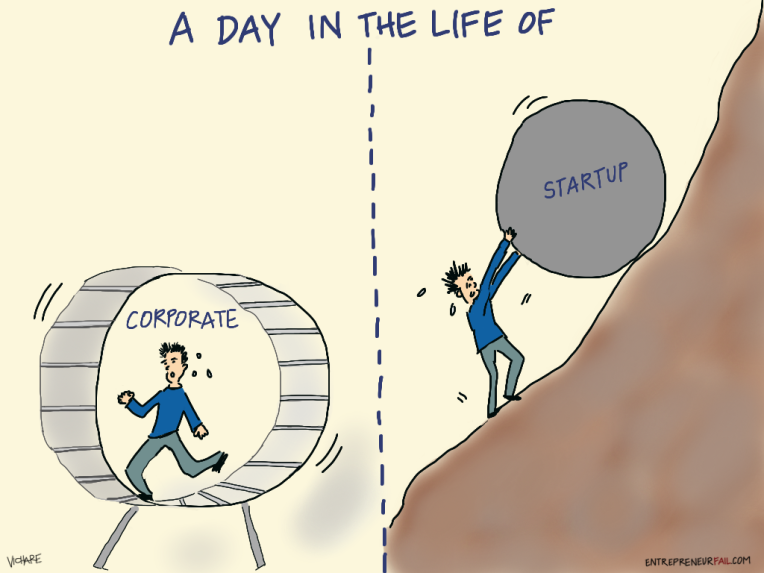 I was tired of running in circles of the big company I was part of and decided to go back to hills where I think, I belong. I’ve decided to work with much smaller companies, and hopefully build something from scratch, repeatedly. There is little co-relation between what I studied in college, what I was doing at ExxonMobil, what I am doing now and what I had dreamt of doing as a kid but this puddle of ideas and memories is what life is! I am just trying to keep it a notch above mediocrity, that’s all. A lot of my batchmates are now in the US for further technical study, some have switched jobs to get a step closer to their dream MBA college. I do appreciate the long term view that’s at play here but I have not been able to convince myself for I know for sure that I don’t know if my future self agrees with my present self’s decisions. So instead this year so far has been centered on a self generated problem statement – “let’s find an interesting problem to solve!”. Infact the primary audience of this blog is not you guys, ouch! but my future self so that I have no troubles answering the question – “what in God’s name was I thinking!” if it ever comes to that, and I know at some point it would. How this would all tie-up together is something I’m not worrying about, good-luck future-me!

I enjoyed the time in Bangalore, it was my first full-time job out of college, and I learnt a lot in the MNC setup that ExxonMobil provided. If I were to recommend  a fresher, coming straight out of college and clueless about life like most of us are, I would definitely recommend going for a corporate job, for it sets a solid foundation needed for a long professional career. Once the base is set, a job at a younger company hopefully would accelerate the learning and growth. So after 2 years of taking rounds of the parking lot, I am now ready to roll the windows down, get the music volume up and step on the accelerator to feel the breeze, and just to complete the metaphor, mind it that in Gurgaon, dust hits you first but eventually you’ll get to the good part.

More to follow on what I am doing currently and where, but after rounds of testing I’ve realized operations as a function is where I fit. I love analyzing business problems and come up with creative and yet easy-to-implement solutions. So that’s what I’ve been doing, got to it after a few iterations, and the best part is that the INTJ me loves to be at intersection of departments, not having to follow a routine and yet contributing to the overall growth of the company. It gets overwhelming at times but hey! there are no manuals for pushing a rock uphill, one has to JUST DO IT 😉

One thought on “Life in the fast lane”